It’s amazing when a building has a ramp. It’s one of those things that people always prefer for a building to have because they promote accessibility. There is a not-insignificant number of disabled people who would prefer to use a ramp over the stairs, and in some cases, they might not be able to even use stairs. So, if your building doesn’t have a ramp already, there is a solution in the form of temporary or portable ramps. They have a lot of uses and can be useful for a lot of people.

Perhaps the biggest and greatest advantage of a portable ramp is how it’s easy to use. That might seem obvious at first to some because when you look at ramps that becomes immediately obvious. And yet, a lot of people still haven’t placed either permanent or temporary ramps on their buildings. They’re incredibly useful to a lot of people, such as the disabled because ramps offer a sure way for them to access a building. On top of that, temporary ramps can be used in tandem with vehicles when you want to load and unload items, which means they’re also great for warehouses and the like. That makes temporary ramps very useful in pretty much any scenario. 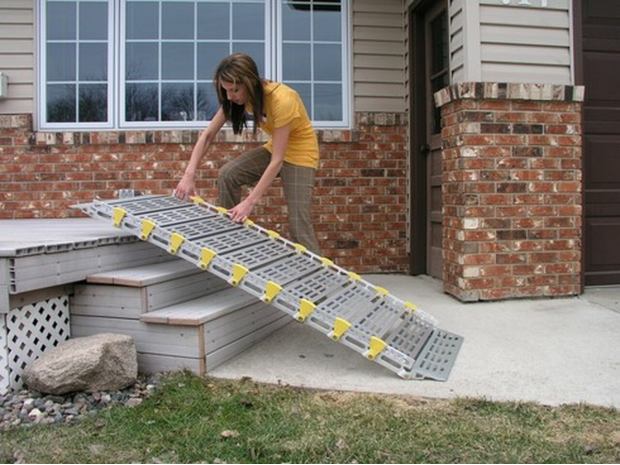 If you were on the fence about getting a temporary ramp on account of its durability, then rest assured, they’re incredibly sturdy and durable. After all, their main focus is being able to withstand heavy loads, and that’s exactly what they’re capable of doing. These ramps are constructed out of sturdy materials that are not only great with weight but are also quite resistant and resilient to the elements. So they won’t easily break, they won’t easily rust, and they can even withstand punishment when you’re moving them around. Portable ramps are as sturdy as can get, which is something you should keep in mind when you’re considering getting one for your building.

Most people tend to associate ramps with people with mobility issues. It’s true, people with mobility issues require ramps more than anyone else, but that doesn’t mean temporary ramps don’t have other uses. For example, one of the main uses that these ramps see is for loading and unloading. They can be easily affixed to a vehicle to load and unload, meaning they’re ideal for warehouses. But they can also be used in more personal cases, such as getting your lawnmower on your truck, for example. That means portable ramps can be used in the home, in warehouses, in construction, for deliveries, as well as a plethora of other situations.

If you have a permanent ramp built into the building, then you need to plan its usage accordingly. That’s because you won’t be able to transport it at all since it’s built-in. That means you’re going to have to bring the vehicles to the ramp, for example. However, portable ramps are called portable for a reason. You’ll be able to bring them with you on the go at all times. They’re ubiquitous in construction work because they can be readily placed within minutes and then removed in even less time. So you can always count on them being easy to install pretty much everywhere.

Permanent ramps tend to take up a lot of space. They’re permanently built-in and the space they take can’t be easily reclaimed. They also can’t be moved since you can only demolish the ramp which is no good if you need to place it someplace else. Portable ramps are very compact, meaning they can be easily used in all locations without them taking up a lot of space. Once you put them away they also don’t take up a lot of space since they’re foldable. On top of that, they’re very light so you’ll be able to carry them personally with ease.

Constructing a permanent ramp takes up a lot of effort, time, and money. On top of that, once it’s built, there’s no moving it around. It does provide benefits, absolutely, and it’s often considered part of the architecture, but there are also a lot of disadvantages. However, portable ramps are the direct opposite of that. They’re so very useful, absolutely, but they’re also very affordable. Pretty much every business can easily afford them if they need them, which makes them all the more crucial. They’re one of the more affordable things you can get for your business, which makes them of great value since they have a lot of usage for various situations.

A lot of people tend to avoid portable ramps if they can, but that shouldn’t be the case. There is a common misconception that temporary ramps aren’t safe, and that’s far from the truth. They’re perfectly safe as it’s evident by their sheer usage in different industries and warehouses. Don’t fret about falling off the ramp because that’s not possible on its own. Their sturdiness allows you to walk as normally as you would on solid ground, and they’ll be able to hold several people walking over them. Just treat them as you would the ground.